Electro-magnetic stimulation (EMS) is a noninvasive treatment method which is used in many neurodegenerative diseases. Oxytocin, as a neurohypophyseal hormone has anti-anxiety effects and might be involved in the regulation of mood disorders, such as depression. It was suggested that EMS can change the brain plasticity in different cognitive states and improve both learning and retention. Positive effects of Oxytocin were mediated by the Hypothalamo-hypophyseal-adrenal axis.

The development of depression can be explained by dysregulation of different neurotransmitters- monoamine, gamma amino butyric acid, glutamate [1,2]. Although depression can be treated with pharmacological substances, about 30-40% of patients are resistant to such treatment, and their recovery are not possible. Long-term treatment with antidepressants impairs memory- both long term and short term memory [3,4].

Therefore, the goal of modern psychiatric research is to explore new ways for antidepressant therapy, which will allow treating groups of resistant patients. Electro-magnetic stimulation (EMS) is a non-invasive treatment method [5-8], used for the treatment of different neurodegenerative diseases [9]. EMS can be used independently or with antidepressant medicines. In this case, the used dosage of antidepressants will be considerably low. The TMS (transcranial magnetic stimulation), was approved by the FDA for the treatment of pharmacologically resistant depression. TMS has not been shown to have any side effects on neurological, cardiovascular, and gastro-enteral characteristics of the body [5,10].

When EMS affects the body, weak electric currents are induced, which can lead to changes in the polarization and activity of neurons. When EMS is delivered repetitively, long-term changes in cortical function are induced. These changes can be used to study the plasticity of the brain. It is known that during training, the functional plasticity of the brain also changes. During depression, cognitive impairment occurs, such as forgetfulness or confusion [4,11]. Therefore, various repetitive EMS strategies are being developed to possibly modulate cognitive function. EMS can serve as an enhancer of cognitive functions in both healthy and sick people.

Oxytocin (OXY) is a nanopeptide hormone, synthesized in magnocellular and parvocellular neurons of the paraventricular nucleus (PVN) and supraoptic nucleus (SON) of the hypothalamus. OXY causes uterine contractions during labor and milk ejection during lactation in mammals. The OXY receptor, a member of the G protein-coupled receptor family, is expressed widely in the CNS, especially in the ventromedial nucleus of the hypothalamus, the central nucleus of the amygdala, the head of the caudate-putamen, and the hippocampus. Therefore, OXY acts as a neurotransmitter/neuromodulator to regulate a range of CNS functions in males and females, including emotional, parental, affiliative, and sexual behaviors, as well as spatial and social memories, such as mother-infant bonding. OXY mediates an antidepressant-like effect in male mice, which disappears in OXY knockout mice. The administration of intranasal OXY in clinical populations seemed to improve aspects of social cognition, including emotion recognition, and mood [12,13].

Depressed patients systematically exhibit hyperactivity of the hypothalamus–pituitary–adrenal (HPA) axis. HPA axis activity is regulated by the secretion of corticotropic hormone-releasing factor (CRF), vasopressin (AVP), and oxytocin (OXY) from the hypothalamus, which finally stimulates the secretion of the glucocorticoids from the adrenal cortex. Glucocorticoids interact with their receptors (GRs) in multiple target tissues including the HPA axis by feedback inhibition [10]. The activity of the HPA axis also can be inhibited by OXY via GRs. OXY reduces the activity of brain regions that produce anxiety and might be involved in the rehabilitation of depressive-like behavior [12-14]. The effect of OXY on anxiety might be mediated by the de-activation of the HPA axis [15].

We decided to investigate the correlates of emotionally-motivated behavior and cognitive function in clomipramine-induced depressed rats on the background of EMS and OXY.

We hypothesized, that OXY, as the antagonist of GRs, could have an antidepressant-like results, which might strengthen the notion of its therapeutic potential treatment strategy for depression.

2. An animal model of depression was prepared by subcutaneous injection of Clomipramine (25 mg/kg) from 8 to 21 days of neonatal development. The control group received the saline injection in the same period of life [16,17].

3. Electro-Magnetic stimulation –– For the EMS, the device with the special coil, designed at Tbilisi State Technical University, Georgia was used. This device gave us the opportunity to change the parameters of EMS, such as stimulus frequency, number, and duration of stimuli. The parameters of EMS, which partially or fully inhibited the behavior manifestation of depression, were established during pilot experiments. For repetitive EMS the following parameters were detected: 10000 -15000 Hz frequency, 1.5 m/Tesla, for 15 min, during 10 consecutive days.

4. Forced Swimming Test (FST) - The test is quite sensitive for studying depression degree. In our experiments, the rats were individually placed in a vertical cylinder containing water (25°C) for 15 min. 24 hours later, the rats were placed again in the same cylinder and the time of immobility, active swimming, struggling/climbing, and time spent under the water were measured during a 5 min period [18].

6. Statistical data processing - Data reliability was assessed using parametric and non-parametric techniques, with the use of one- and two- way layout of factorial analysis.

Clomipramine is a tricyclic antidepressant. Clomipramine is used for the treatment of panic disorder, major depressive disorder, and chronic pain. The mechanism of action is not entirely clear, but it is believed that Clomipramine causes increasing of serotonin levels. However, neonatal injection of Clomipramine (from 8 to 21 days) might develop depression-like conditions. 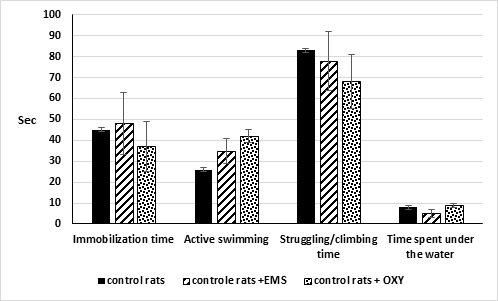 In FST on the background of clomipramine injection, the time of immobilization was increased from 45±16 to 220±12 (p <0.01) and active swimming time from 26±7 to 39±5 (p<0.05). Clomipramine injection decreased the time of the struggling from 83±12 to 35±4 (p<0.05) and the time spent under the water from 8±1 to 6±1 (p<0.05). This fact indicates the development of depressive-like behaviour during neonatal injection of clomipramine. In untreated control rats, EMS or injection of OXY did not change the behaviour in FST (Figure 1). 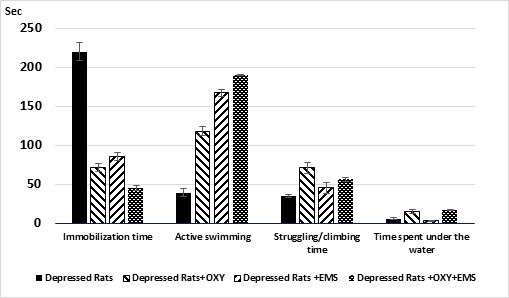 In depressed rats, EMS and the injection of OXY (separate), or after simultaneous action (injection of oxytocin before EMS), increased the activity of rats in the FST. In particular, the immobility time in the Porsolt cylinder was dramatically decreased in all groups of rats (p<0.01), but the active swimming and struggling was increased significantly, in all cases (p<0.05). Depressed rats in an inescapable aversive situation chose passive coping strategies. The EMS increased the number of active strategies in intact and depressed rats in FST. This data indicates the reduction of the degree of fear and anxiety (Figure 2).

Thus, EMS (effectiveness in promoting active coping) in the FST had the potential to predict its efficacy like the antidepressant. The present study identified the positive effects of EMS and OXY on the treatment of depression-like activity in rats. The acoustic range EMS and OXY decreases fear and anxiety degree and consequently, increases the escape activity in FST.

In control rats, EMS, or injection of OXY did not decrease the time of entrance into the dark compartment compared to unstimulated ones (Figure 3 a, b). 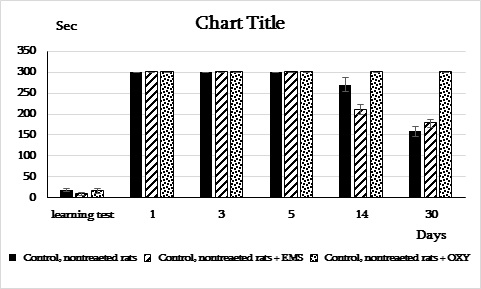 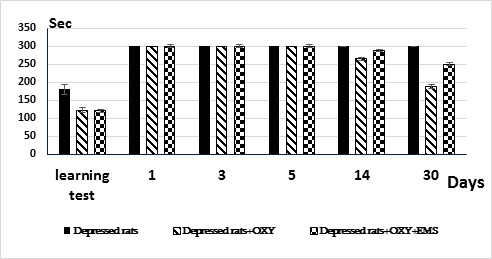 Figure 3 a, b:  The effects of OXY and EMS on the learning and retention tests in the passive avoidance test of control (a) and depressed (b) rats.

In depressed rats, on the background of EMS and OXY, the latent period of entrance into the dark component decreased (p<0.05) compared to depressed unstimulated ones.

In the group of animals with EMS or OXY injection, there was deterioration in the reproduction of learned information on the 14th day after training. Rats entered the dark compartment for shorter latency periods. As for the depressive, unstimulated rats, they did not make mistakes and remembered the trained test after a month. One might be thinking that either the control rats performed the instrumental reflex better (the passive avoidance reaction), or because of the high degree of depression, the motor-exploratory activity reduced, which leads to the correct performance of the test. The last statement is confirmed by the data obtained in OXY treated non-depressed rats.

In this group of animals, the positive effect of OXY on the retention test was observed. We think that OXY reduced anxiety, enhanced attention, and helped the retention of information. In this experiment, performance of the passive avoidance test was 100% 1 month later. The behaviour of rats also was different in the lit section. On the background of EMS and OXY, the number of attempts to enter into the dark section increased compared to depressed rats (Figure 4 a, b). 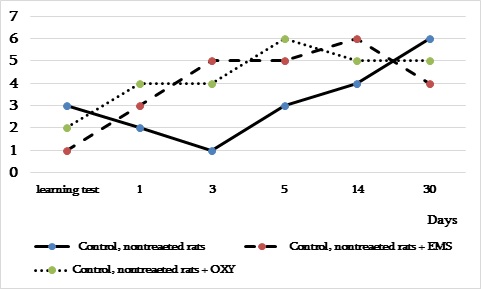 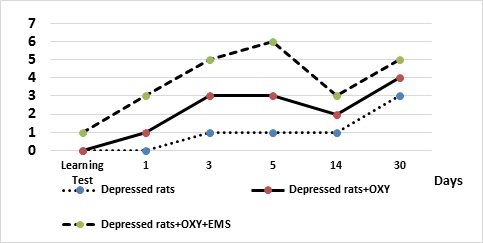 Figure 4 a, b: The number of entries into the dark component during learning and retention tests of non-treated (a) and depressed rats (b) in the passive avoidance test on the OXY and EMS background.

How does systemic injection of oxytocin act to offset the depression like-behavior? Glucocorticoids regulate the excitability of neurons, neurogenesis and consequently, are involved in the processes of learning and memory [19].

In response  to the stress factor, the HPA axis is activated and glucocorticoid secretion is increased. Elevation in glucocorticoids (response to acute stress) have the positive effects on physiological and behavioral characters [15,20,21]. However, prolonged elevations in glucocorticoids induced by chronic stress can lead to pathological changes. The HPA axis is activated by paraventricular neurons PVN [8,22,23]. These neurons synthesize CRH, vasopressin (AVP), and OXY. These hormones can stimulate HPA axis. Suppression of GRs’ expression reduces the activity of the HPA axis. Central infusion of oxytocin attenuates depression activation of the hypothalamic-pituitary-adrenal (HPA) axis response. Anxiety behaviors are also reduced in rats administered intraperitoneal oxytocin. The EMS improved the emotional-motivated behavior of depressed rats. We think, that on the background of EMS, the negative feedback of oxytocin on GRs increased, which, in its turn, recovered behavioral disorders induced by the depression and made the process of treatment more effective. The GRs monitoring in the brain and blood at all the stages of the research will allow us to prove the correctness of the results obtained from our behavioral experiments. Therefore, using EMS, it will be possible to improve cognitive function, which was impaired by the depression. It has great importance for the reduction of the symptomatic characteristic of depression. Besides, in the case of the long-term impact of antidepressant drugs, the exposure by EMF will reduce negative side effects induced by the medications. Under the influence of EMF, blood circulation improved. Consequently, the tissue supply with oxygen increased. So, in such way, EMS might promote the reduction of depression symptoms. Thus, the positive, noninvasive impact of EMS on our subjects was revealed. Oxytocin could mediate the EMS antidepressant effects.  EMS and OXY might affect the imbalances of neurotransmitter systems and hyperactivity of HPA axis and restore it in brain structures, which are essentially responsible for the expression of depressive-like behavior and fear responses.

Copyright: Bukia N, et al. © 2021. This is an open-access article distributed under the terms of the Creative Commons Attribution License, which permits unrestricted use, distribution, and reproduction in any medium, provided the original author and source are credited.

Are Human Needs Fulfilled In Treatment Adherence In Hemodialysis? A Crossover between Social Work and Neurology