Vascular cognitive disorder (VCD)2 comprises a heterogeneous group of cerebrovascular disorders, leading to a continuum of cognitive impairment, ranging from the level of mild cognitive impairment or mild vascular cognitive disorder (VCDM) to full-blown vascular dementia or major vascular cognitive disorder (VCDD). The Mattis Dementia Rating Scale-Initiation Perseveration subscale (MDRS-IP) may be useful for the assessment of frontal dysfunction, which is significantly affected in most patients with VCD. The aim of the present study was to explore the diagnostic value of MDRS-IP in patients with VCD of various severity. In a total of 140 patients fulfilling most recent criteria for VCDD and VCDM or having cerebrovascular disease with no clinically obvious cognitive decline (vascular controls, VC) and 15 healthy controls (Ctrl) we administered the Mini Mental State Examination (MMSE) and the MDRS-IP. Both MMSE and MDRS-IP perform better at the dementia level of VCD (VCDD), being effective in the discrimination of vascular dementia from the Ctrl or VC groups. However, in patients with VCDM, MMSE and MDRS-IP have statistically significant, but clinically moderate ability to differentiate from Ctrl or VC, i.e., to identify cognitive dysfunction in early, pre-dementia stages. Finally, both tests failed in the discrimination between VC and Ctrl, indicating that they are not sensitive enough to identify patients with cerebrovascular disease and subclinical cognitive dysfunction.

Vascular cognitive impairment [1] or vascular cognitive disorder (VCD) [2] comprises a heterogeneous group of cerebrovascular disorders, leading to a continuum of cognitive impairment, ranging from the level of mild cognitive impairment or mild vascular cognitive disorder (VCDM) to full-blown vascular dementia or major vascular cognitive disorder (VCDD) [3]. Although dysfunction of multiple cognitive domains is increasingly recognized in vascular dementia (VD), [4] requiring extensive neuropsychological testing [1,2] the frontal dysexecutive syndrome seems to be a key presenting and diagnostic feature, [5] especially in patients suffering of subcortical small vessel disease [6]. The Mattis Dementia Rating Scale (MDRS) is a commonly used global cognitive tool composed of 5 subscales, testing attention, initiation and perseveration, construction, conceptualization and memory [7]. In particular, the initiation-perseveration subscale (MDRS-IP) may be useful for the assessment of frontal executive function [8] and can be used as a short stand-alone instrument [9]. The aim of the present study was to explore the diagnostic value of MDRS-IP in patients with VCD of various severity.

Finally, a total of 140 patients were enrolled in the study. Thirty eight of them (27.14%) had multiple large vessel infarcts, 87 (62.14%) had subcortical small vessel disease and 15 (10.71%) had combination of the above. They were divided in 3 groups: (a) The major VCD or vascular dementia group (VCDD) comprised 42 patients fulfilling the VASCOG criteria for probable major VCD [2]. (b) The mild VCD or vascular mild cognitive impairment group (VCDm) comprised 47 patients fulfilling the VASCOG criteria of probable mild VCD [2]. (c) The vascular control group (VC) comprised 51 patients with significant imaging evidence of cerebrovascular disease, sufficient for at least mild VCD according to the VASCOG criteria, [2] but no cognitive complaints (by the patient or knowledgeable informant) and no clinical impression of cognitive dysfunction during interview.

For comparison, a control (Ctrl) group was used comprising 15 healthy subjects without lesions in MRI and with no cardiovascular risk factors.

All subjects or legal guardians gave their written informed consent for inclusion in the study, which was performed according to the 1975 Declaration of Helsinki, revised in 2013 and had the approval of the Scientific and Ethics Committee of Eginition Hospital.

Following routine history taking and physical (including neurological) examination, patients (and their caregivers) and controls were first approached by a semi-structured interview assessing global cognitive status, activities of daily living and behavioral symptoms. Next, they were given the MiniMental State Examination (MMSE), [12] followed by the MDRS-IP [7]. Both tests lasted no more than 20 min in all patients. In brief, the MDRS-IP has 11 items (E-O) testing verbal fluency and programming, motor programming and drawing [7]. Items do not contribute equally to the total score (maximum 37), which is heavily dependent to the score of item e testing complex verbal fluency. The latter alone, with a maximum of 20 points, accounts for 54% of the maximum total score.

Neuropsychological test scores were compared among groups by 2-way analysis of covariance (ANCOVA) with diagnostic group and sex as cofactors and age and education as covariates. This was deemed necessary in order to control for the above parameters. However, since some of the variables did not follow the normal distribution and/or variances were heterogeneous, comparisons were repeated by non parametric tests (Kruskal-Wallis test followed by individual Mann-Whitney U tests with Bonferroni correction for multiple comparisons). The Rank order Spearman correlation coefficient (RS) and multiple regression models were also used for exploring the possible effects of variables such as education, gender and age on neuropsychological test scores and for assessing concurrent validity. Internal consistency of MDRS-IP was measured by Cronbach’s α. The discriminative value of MMSE and MDRS-IP was tested by Receiver Operating Characteristics (ROC) curve analysis, followed by comparison of the areas under the curves (AUC). The level of statistical significance was set at 0.05.

Demographic, and neuropsychological data of the studied groups are summarized in Table 1 and Figure 1. No significant difference in sex was observed. The VCDM and VCDD groups were relatively older and controls had more years of education as compared to the other groups; however, none of these numerical differences reached statistical significance. Significant differences in MMSE and MDRS-IP were observed among groups in both Kruskal-Wallis test and ANCOVA (Table 1). The MMSE score was lower in VCDM as compared to VC and lower in VCDD as compared to all the other groups; however no difference was observed between Ctrl and VC. The MMSE was affected negatively by age (P=0.016) and positively by education (P=0.012). Sex also affected MMSE scores with males performing better than females (P=0.023). 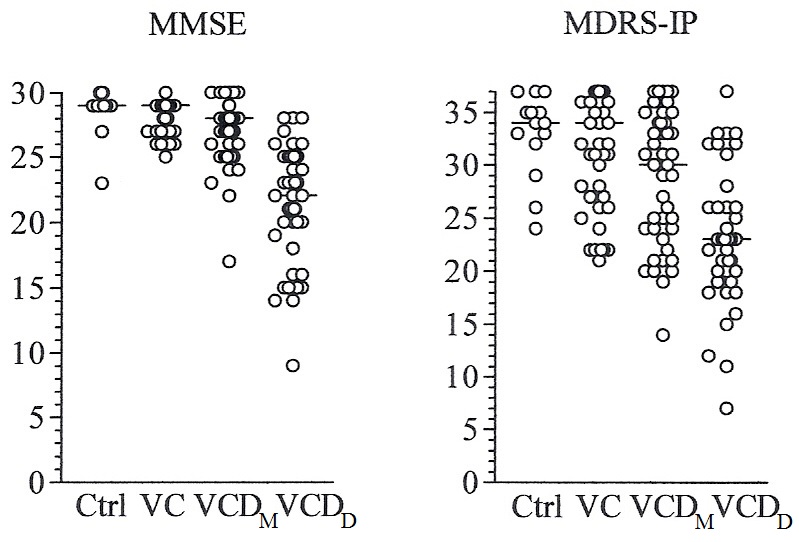 The MDRS-IP score was lower in the VCDM group as compared to VC and Ctrl, and lower in VCDD as compared to all the other groups; however no difference was present between Ctrl and VC (Table 1). Minor effects of sex (but not sex by group) and education did not reach statistical significance (both P=0.09).

Table 1: Demographic characteristics and neuropsychological findings in the studied groups.

As regards MDRS-IP items, semantic verbal fluency and simple fluency were lower in VCDD as compared to all other groups (Table 2). Significant differences were also observed in the other items except for finger taping, and the second and third drawing items (Table 2).

Cronbach’s α for MDRS-IP was 0.45 with no significant improvement after deleting any of the items.

The results of the present study indicate that both MMSE and MDRS-IP perform better at the dementia level of VCD, being effective in the discrimination of vascular dementia from normal subjects or vascular controls (although, for the latter discrimination, MMSE may perform slightly better). However, in patients with vascular mild cognitive impairment, MMSE and MDRS-IP have statistically significant, but clinically moderate ability to differentiate from normal subjects or vascular controls, i.e. to identify cognitive dysfunction in early stages. Finally, both tests fail in the discrimination between vascular and normal controls, indicating that they are not sensitive enough to identify patients with cerebrovascular disease and subclinical cognitive dysfunction.

Previous studies have shown that MDRS-IP, may be useful in the discrimination between controls and patients with post-lacunar stroke dementia [9] or cognitive dysfunction after stroke associated with small vessel disease) [13]. Additionally, other short frontal tests may be useful in vascular dementia, [14,15] and equally effective with MDRS-IP in the discrimination between stroke associated with small vessel disease and controls [16]. Moderate [17] or low [18] diagnostic value in executive dysfunction after small subcortical infarcts has been described by some authors. However, incident lacunes in cerebral autosomal dominant arteriopathy with subcortical infarcts and leukoencephalopathy (CADASIL) do affect the score of MDRS-IP [19]. After acute infarcts, the score of MDRS-IP is affected negatively by the load of ischemic lesions in basal ganglia and corona radiate [20] and by the degree of (non-Alzheimer’s) frontal atrophy [21]. Discrepancies between studies may be due to differences in the populations studied (post-stroke, post-lacunar infarction, subcortical small vessel disease), the degree of cognitive impairment (vascular dementia, various levels of cognitive dysfunction) and the criteria used for the diagnosis and classification of vascular cognitive disorder. In the present study, included were patients with all subtypes of vascular cognitive decline, in an effort to achieve a population as representative as possible of the true patient population. Furthermore, in an effort to explore the entire cognitive continuum of cerebrovascular disease, we subdivided patients according to the degree of cognitive decline, in vascular dementia (VCDD) and a pre-dementia symptomatic group (vascular mild cognitive impairment, VCDM) and, additionally, we used a preclinical vascular control group (VC) in which cerebrovascular disease has not resulted yet in clinically evident cognitive dysfunction.

In conclusion, both MMSE and MDRS-IP, are comparably useful in vascular cognitive disorder of dementia severity. In less severely affected patients their diagnostic value decreases and in clinically unaffected patients they are not sensitive tools. Other neuropsychological tools, alone or in combination, may be needed in order to achieve early recognition of cognitive dysfunction in non-dementia patients.

Conflict of Interest: The authors declare no conflict of interest.

Copyright: Paraskevas GP, et al. ©2019. This is an open-access article distributed under the terms of the Creative Commons Attribution License, which permits unrestricted use, distribution, and reproduction in any medium, provided the original author and source are credited.