Objectives: To determine the efficacy and safety of intravenous immunoglobulin (IVIG) as add on therapy in treatment of viral encephalitis in children.

Background: Encephalitis is a syndrome of neurological dysfunction that results from inflammation of brain parenchyma, caused by an infection or an exaggerated host immune response, or both. Attenuation of brain inflammation through modulation of the immune response could improve patient outcomes. Biological agents such as immunoglobulin have anti-inflammatory and immunomodulatory properties therefore may be useful as add on therapy in treatment of children with encephalitis.

Encephalitis is a syndrome of neurological dysfunction that results from inflammation of the brain parenchyma [1]. The worldwide annual incidence ranges from 3.5 to 7.4 under one year of age. In 2013, the International Encephalitis Consortium (IEC) created simplified consensus diagnostic criteria for a standardized case definition of encephalitis. Altered mental status for over 24 hours without an alternative cause is required as evidence of neurologic dysfunction. In addition, supplemental minor criteria must be present (2 for possible, ≥ 3 for probable or confirmed): fever ≥ 38°C within 72 hours, seizures, new focal neurologic findings, cerebrospinal fluid (CSF) pleocytosis (≥ 5 white blood cells/μL), neuroimaging with brain parenchymal changes or electroencephalogram (EEG) consistent with encephalitis [2]. Encephalitis could result from an infection of the brain (infectious encephalitis) or from autoantibodies that affect the brain (immunemediated encephalitis), or both [3]. Infection has been considered the major cause of encephalitis and more than 100 different causative pathogens have been recognized. Viruses are the most common pathogens known to cause encephalitis. However, a host of other pathogens including bacteria and protozoa have also been implicated [4]. Immune-mediated disorders, such as acute disseminated encephalomyelitis (ADEM) recognized to contribute to a significant proportion of cases where no infective cause is identified [5]. Several well-characterized immunological syndromes that are mediated by antibodies against central nervous system surface proteins such as the N-methyl-D-aspartate receptor and the voltage-gated potassium channel-complex and its associated proteins have been identified in people with encephalitis [6]. And these account for 4 and 7% of overall cases [5]. An exaggerated host immune response has been implicated in the pathogenesis of encephalitis and this has been shown to play a part in the disease pathogenesis [7]. IVIG is being used increasingly in the management of a wide range of neurological conditions and its efficacy has been established in a few of these [8]. It has a half- life of three to four weeks. IN encephalitis attenuation of brain inflammation through modulation of the immune response could improve patient outcomes [2]. Biological agents such as immunoglobulin that have both anti-inflammatory and immunomodulatory properties may therefore be useful as adjunctive therapy for Encephalitis [9]. Acyclovir is widely used in the treatment people with herpes virus infections, particularly herpes simplex and varicella-zoster virus. The role of corticosteroid in the treatment of encephalitis is not yet established. Although not routinely used in herpes simplex virus encephalitis (HSVE), corticosteroids are often used in people with HSVE with marked cerebral edema, brain shift, or raised intracranial pressure. Information from clinical observations [10,11] indicates a substantial benefit in outcomes for people with HSVE treated with adjuvant dexamethasone. Corticosteroids are potent anti?inflammatory agents. Results of a prospective randomized controlled trial (RCT) on the use of adjunctive corticosteroid therapy in HSVE are awaited [12]. In present study we studied the role of IVIG as add on standard therapy of children with viral encephalitis.

All the studied groups were subjected to detailed history taking with special emphasis on development of altered mental status, development and onset of fever, new onset seizure and focal lesion, complete neurological examination (Glasgow coma scale, mental status, cranial nerves examinations, muscle tone, muscle power, reflexes and sensory system affection) and the laboratory work-up including 1 ml of blood was collected in EDTA-containing tubes for complete blood count (CBC) by a Sysmex XN-1000 (Japan ;19723), 2 ml of venous blood was obtained from each subject by venipuncture; and was put into a plain tube and left to clot and then centrifuged for 10 min at 4000 rpm. The serum that was obtained was utilized for estimating liver enzymes (ALT and AST) by kinetic UV advanced strategy IFCC (LTEC kit, England) and serum creatinine by DIAMOND Diagnostics, Germany kits and CSF was collected at time of admission for all cases with comment on CSF pressure, color, density and each sample examined microscopically for WBC count and CSF culture. The DNA was extracted from CSF using Thermo Scientific Gene JET Whole Blood Genomic DNA Purification Mini Kit (K0781) according to the manufacturer’s instructions.

In terms of the demographic data, there were no significant difference between patients groups regarding age, sex, residence and consanguinity (Table 1).

Table 2: Diagnostic criteria of encephalitis of the two groups. 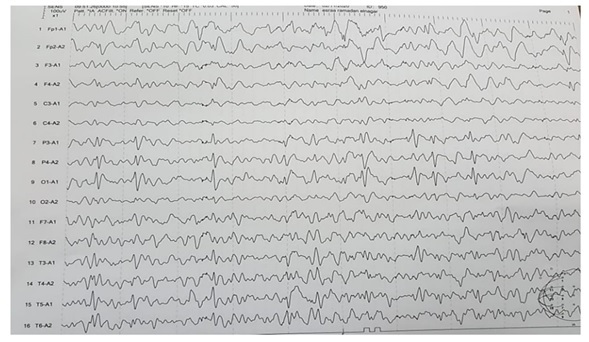 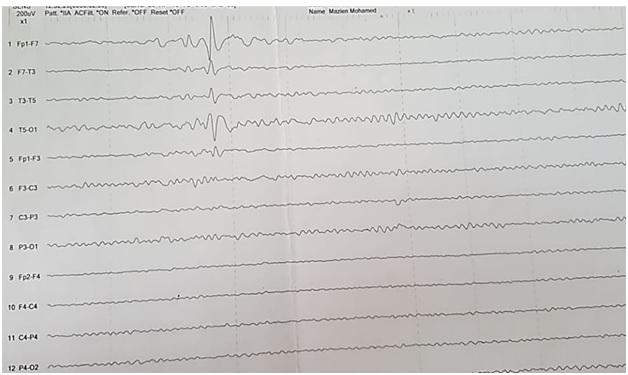 Duration of hospital admission was calculated and patients were followed up for assessment of disability and post encephalitic sequelae. There was no significant difference regarding outcomes (mortality) P 0.67, significant disability among survivals P = 0.08 and duration of hospital admission (Mean ± SD = 21.86 ± 14.49 in group1 and (Mean ± SD = 29.40 ± 21.49) in group 2 P0.093 (Table 4).

Encephalitis is a syndrome of neurological dysfunction that results from inflammation of brain parenchyma [1]. Biological agents such as immunoglobulin that have both anti-inflammatory and immunomodulatory properties may therefore be useful in Encephalitis [9].

Regarding the demographic data there were no significant difference between patients groups as regarding age, sex, residence and consanguinity.

Our study suggests a few beneficial effects of IVIG in reducing post encephalitic sequelae and duration of hospital admission. However due to limitation of this study, we cannot draw any firm and definite conclusion about safety and effectiveness of use of IVIG in treatment of viral encephalitis.

We recommend that well-designed randomized controlled trials are needed to investigate the role of IVIG in all forms of encephalitis and to provide evidence to inform clinical practice on the management of children with encephalitis. Internationally agreed core outcome measures for clinical trials in childhood encephalitis are still needed. For future trials, Long-term follow-up (beyond the hospitalization period) needs to be assessed. Consideration should be given to a large sample size with statistical power to detect clinically significant differences in these outcomes.

There is no conflict of interest.

No fund was received.